Heather Brown, also known as the superheroine Spinnerette, is an introverted young woman. Socially awkward and a bit of a geek, Heather is a comic book fan and a closet D&D player. After a laboratory accident at her college workplace, she is gifted with abilities similar to those of a spider, a la Peter Parker / Spider-Man. One of Heather's running gags is that her "spider-sense" reveals only the obvious.

She can be naive to the point of oblivious to what's going on around her, and is especially dense when it comes to Mecha Maid's true feelings for her.

Heather is an optimist, believing the best can happen regardless of the situation. This combined with her naivete gets her into situations when the worst happens and she is entirely unprepared for it.

Heather's powers come from the C-K reaction, making her a natural superhuman as opposed to Tiger, whose powers are magical, and Mecha Maid, whose abilities stem from technology. Her C-K energy was activated by a laboratory accident involving Dr. Lambha's Genetic Infusion Chamber.

After her accident, Heather quickly grows four additional arms. She discovers that she has the proportional strength and agility of a spider. She is capable of climbing the sheerest of surfaces and can produce a high-tensile spider-silk thread that shoots out of the base of her spine. Her metabolism is greatly increased, leading to the development of advanced musculature (including her much-beloved "girl abs"). In addition, she later on discovers that she has a super-healing factor, capable of healing wounds in a matter of minutes or seconds, as well as a general immunity to toxins.

She can use her arms to perform several actions at the same time and is ambidextrous with her new limbs. One example was her using her six arms to rapidly knit cloth out of her own silk thread. Sometimes, her arms act on their own when she is inattentive or lets her mind wander (especially "Bottom Lefty", which is particularly frisky around Mecha Maid). She is very proud of her arms to the point where she would rather die than lose her extra arms.

After a second run-in with the Genetic Infusion Ray, she is imbued with Sahira's C-K powers, which cause her to begin growing extra arms at an alarming rate. Dr. Universe manages to return her to normal by amputating her extra arms and restarting her C-K reaction.

In Issue 13, she discovered she was immune to poison after Avonlea's water supply was contaminated with Captain Alberta's toxins. This immunity does not extend to non-harmful toxins such as alcohol.

Heather Brown uses paraphernalia both as Spinnerette as well as in her civilian guise. Her extra arms stand out quite obviously against her small frame. At first, she hides these under a coat, but quickly realizes a better disguise is needed. She wishes to wear an over-sized backpack to hide her extra arms behind her back (mostly so she can show off her aforementioned "girl abs"), but her roommate, Sahira, tells her it is a bad idea because she may have to take the backpack off sometimes. Instead, Sahira makes a fat suit for her, large enough for Heather to hide her arms inside the belly.

As Spinnerette, Heather wears a spider-themed suit. She has had three suits so far. Her first suit was made from a trio of store-bought Venom costumes, with the arms removed from two of them and sewn onto the third. She wears a mask as well as a long, brown wig to hide her identity. This costume is largely trashed on her first, ill-fated outing as a superhero and suffers similar damage on almost every scenario afterward. After discussing the matter with her teammates, she learns that the costume is quite ill-suited as a super-suit. The nylon-spandex material will melt if exposed to extreme heat as well as tear easily under the slightest stress, providing no protection at all. This proves to be for the best, as Spinnerette soon receives a cease-and-desist order from Marvel Comics alleging that her make-shift superhero suit infringes on their copyright by resembling the costume worn by Julia Carpenter as Spider-Woman.

After discarding her quick-and-dirty suit, she gets Sahira to make her a new one. Sahira designs a suit based off the black-and-gold body decoration of the golden orb spider. Heather takes to the new suit quickly, opting for an auburn wig she says more-closely matches the motif. She wears this prototype suit for a while until Sahira manages to make an identical one out of Heather's own silk. Being made of spider-silk, the suit is perfectly-suited for the spider-themed superhero, can withstand tremendous punishment, and breathes like fine cotton.

In her disguise as Spinerette, Heather cannot wear her glasses, so instead she wears contacts.

Heather's skills revolve mostly around a combination of her grad student-level education as a scientist along with her knowledge of geek culture. She is quite skilled with electronics and other forms of technology, being one of the principle engineers working on Dr. Lambha's experiment. Her personal knowledge of comic books is what drives her to become a superhero in the first place, using models such as Spider-Man. She quickly discovers that this is not the end-all, be-all to being a superhero, and she is horrifically outclassed against even the most common criminal, her superpowers notwithstanding.

After teaming up with Tiger and Mecha Maid, she begins accumulating new skills from her teammates. Tiger instructs her on the basics of detective work and law enforcement, while Mecha Maid teaches her the martial arts. Her training continues when she and Mecha Maid head to Canada to train with the League of Canadian Superheroes. By the time she goes semi-solo following the erstwhile-retirement of Tiger and the injury of Mecha Maid, Spinnerette is able to hold off even the most hardened of super-villains single-handed (well, six-handed... you know what I mean).

During her early childhood, Heather Brown was a nerdy, little girl with delusions of becoming a superhero, codenamed "Mommy Long Legs". Later on, she became a nerdy, little biology graduate student, still with the same delusions.

She attended Ohio Research University in Columbus, OH, where she was roommates with Sahira, an Indian-American who planned on becoming a wardrobe designer. She worked under a mentorship as a lab assistant with Dr. Lambha, who had cracked the latest development in genetics with a new Genetic Infusion Chamber that would be able to combine DNA with certain properties together, in this case, spiders. During an interview with the local news station, Dr. Lambha expressed strong displeasure that people misapprehended his intentions, believing the chamber could cure cancer or reverse obesity. He got into an argument, stating that he was a scientist, and his work was exactly what he said it was: the recombination of DNA. He was testing on spiders due to their genetic makeup, not to combine spider DNA with the DNA of any other creature. His earlier test subjects, a group of mutated tarantulas, would not grant a person superpowers, though they would develop a nasty infection if bitten. After the unfortunate interview, Dr. Lambha was so angry that he ordered Heather to stay behind and clean up the lab.

Alone in the lab, Heather was not paying attention and slipped into the chamber, where she accidentally became the next test subject. The Genetic Infusion Ray activated automatically and began to alter Heather's DNA, combining it with that of a spider.. The power overloaded, and the device exploded. Heather climbed out of the pool, discovering some startling changes to her body: she now had six arms.

Distraught and worried, Heather headed across campus to return home. In between fretting over her condition, she began thinking that it might be a good thing, that she might be able to become a superhero after all. This thought was put to the test when a group of drunken fraternity boys accosted her on the way home. Tearing off her jacket, they revealed her extra appendages. Alarmed, Heather fought back, easily besting them with newfound, superhuman strength. She found that she had the strength and agility proportional to that of a spider. In defeating the would-be assailants, Heather spent her time considering what was, to her, the most important question of all: what would her superhero name be?

She returned to her apartment, and her roommate was shocked to discover her physical changes. Sahira wanted to take her to the hospital, but Heather wished to use her powers to fight crime. After enduring Heather's begging, Sahira finally caved and agreed to help Heather out by making her a super-suit, but only on the condition that she would go see a doctor. Heather agreed, but after she got her new suit, she excitedly left on her first patrol.

Heather quickly discovered that she had other spider powers (some of which were, unfortunately, anatomically correct). She could scale buildings by sticking to the walls and even shoot spider-silk draglines from the base of her spine. She practiced swinging on the dragline just as Spider-Man did, but found it was a lot harder than it looked.

She quickly learned that simply having superpowers did not make one a superhero when the first night went sour. She was scuffed up and injured after a run-in with a petty criminal. Defeated, she called for Sahira, who picked up her wayward roommate and took her to see a med student she knew.

With the med student's help, Sahira crafted a fat suit for Heather to help disguise her extra arms and protect her identity while she was off-duty. This was not Heather's first choice, as she wished to have a civilian disguise that would allow her to show off her impressive new musculature.

One night during Heather's patrol as Spinnerete, she met an evil supervillain wearing a spider motif costume who was also named Spinerrete (later dubbed Evil Spinnerette by Heather). Evil Spinnerette was angered that Heather stole her name and claimed she was copying her. The two would fight only for villainous Spinnerette to escape. Fortunately, Heather was saved by Tiger and Mecha Maid, who helped untie her and offered her membership on their team.

After returning to their base the trio went over and discussed Evil Spinnerette's plans. Evil Spinnerette had been gathering various artifacts listed in a cursed D&D Guidebook that was among a small group of cursed published guidebooks. She would use these artifacts to cast a ritual to D&D's spider god Lolth. The team needed Spinnerette to help in defeating Evil Spinnerette by distracting her while they stopped the ritual.

Heather soon blossomed into a skilled and capable superhero.

How Spinnerette originaly wanted to disguise herself (to show off her "girl abs"). 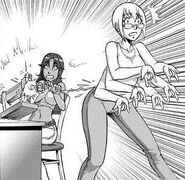 Heather, back when she was normal.
Community content is available under CC-BY-SA unless otherwise noted.
Advertisement