Sahira is Heather Brown's dorm-mate who plans on becoming a wardrobe designer. She was the first to become aware of Heather new status as a superhero. She sews outfits for Heather and generally puts up with her antics while she stumbles around trying to get the hang of her powers. She has a tendency to lampshade the impossibility of some of Heather's spider powers, in addition to being her voice of reason. She is of Indian descent, and she wears a bindi on her forehead.

Sahira has a flucuating personality that drifts from a flirtatious drinker to a worried, motherly friend. She can lose her temper with the ever absent minded Heather, but at the end of the day she always seems to come through. She acts as a wing man for her dormmate, often giving hints on what to do about Darien. She's been seen as religious, scoffing at heather when she suggests that Spinnerette is like Kali (the Hindu goddess.) stating that they only share one superficial characteristic, and it's the same as comparing anyone with a beard to Jesus.

While initially introduced as a normal human, Sahira can temporarily copy superpowers of other CK-sensitive individuals for herself by exposing herself to the samples of their DNA. Typically she does so with the aid of Heather's plushy "Mr. Webby", which rapidly collects DNA on itself.

She is not limited to only one power as she has been shown acquiring multiple powers at once. This is first demonstrated in Chapter 5 when she suddenly develops Heather's spider powers, including her six arms, demonstrating her shock and dislike for these abilities by accidentally defenestrating Heather. However, she later accepts this ability, and typically uses the six arms to mundane effect, like for household chores. In Chapter 14, the transformations that come from this ability are hinted to last roughly half an hour.

Sahira's non-superhero powers include highly developed skills in tailoring, including unorthodox solutions for superhero suits. As she demonstrates in the story, she's charismatic and can be very seductive, putting these social skills to use (like when certain evidence needs to disappear). 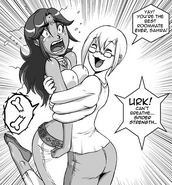 (Human) Sahira being hugged by Heather.