In 1982, Park had black hair with a grey streak down the middle, and had stubble. By 1985, Park's hair had gone grey hair and he had grown a moustache, shaving the rest of his face. He wears an eyepatch, having lost his right eye in a confrontation with Colonel Glass. Despite his age, he is in peak physical condition, capable of taking on metahumans in combat.

Park does not have any known powers. He is, however, a skilled fighter.

In 1982, Park was the Captain of the 707th Unit in the South Korean army. While patrolling the border of the DMZ, he encountered a teenaged metahuman girl dressed in a military uniform, requesting asylum. The girl was pursued by the supersoldier Lieutenant Warthog, but Park and his squad wounded Warthog, forcing him to flee, and took the girl, Kim Jeong, into custody.

Park was tasked with ensuring that Jeong was not a spy, and became her CO when she was recruited by the South Korean military as the superheroine White Heron. In 1985, Park accompanied Heron and Seong to a hostage exchange with the North Korean supersoldier Colonel Glass. While most of the hostages were rescued, Glass provoked a fight with White Heron that resulted in her death and cost Park his right eye.

Park subsequently retired from the military and moved to the United States in order to help Seong raise the baby girl White Heron lost her life protecting, acting as a bodyguard and butler.

As the Captain of the 707th Unit, Park had a good relationship with his subordinates, and was described as being too compassionate.

Following his retiring from the military, Park dedicated himself to looking after White Heron's loved ones, doting on Marilyn like an uncle. 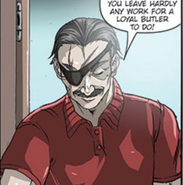 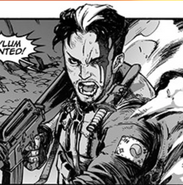 Park in 1982.
Community content is available under CC-BY-SA unless otherwise noted.
Advertisement