Minerva is a Cerberus and guardian of Hell whose job is to capture wayward evil spirits and bring them back. She is apparently named after an ancient Roman goddess. While the Roman Minerva was part of a triad of goddess, this Minerva is a tripartite being, in keeping with her Cerberus nature.

Minerva is a tall anthropomorphic wolf, with big hair, a bushy tail and three heads.

Her left head is cheerful, somewhat childlike, the right is aggressive and seductive and the center seems to be the voice of reason between the two. She describes herself as "one person of three minds, all of whom are Minerva". The thoughts and memories of her heads synchronize while she sleeps.

The three heads can feel the same emotions on occasion, such as being embarrassed when Kitty asked if she should have three or six breasts.

All 3 of them seem to have a crush on the werewolf of London, Ontario.

She is extremely physically strong and describes Cerberuses as being trained to be warriors from childhood. As she puts it, she is "swords and sorcery all in one." She is able to use occult magic as displayed when she used a magic circle of Spinnerette's silk to banish a monstrous Composite Soul back to Hell.

Minerva first appeared in issue 6. A rash of werewolf sightings in Columbus prompted Tiger, Mecha Maid, and Spinnerette to enlist the aid of The League of Canadian Superheroes. It turned out that the werewolves were actually Minerva and several escaped souls that she was tasked with bringing back to Hell. While she was there, she met and developed a crush on the Werewolf of London, Ontario. 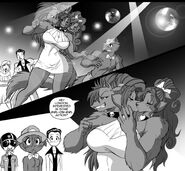