Alexis Woodrow aka "Spinnerette" is a young girl who claimed to have taken up the spider motif before Spinnerette. Used magic and instructions gathered from Dungeons & Dragons books to turn herself into an avatar of the spider queen.

She is very perceptive, to the point where she knows a baited a trap when she sees one. She's also perceptive enough to not just identify but successfully search for superheros in their civilian disguises.

She is also very good at faking her emotions. In Issue 7, she voiced regret for turning herself into a Drider, and voiced interest in somehow reversing the transformation, fooling Spinnerette into helping her, only to later reveal it was all an act.

She has demonstrated an interest in preserving Heather as a worthy adversary, going so far as to resuscitate her after nearly drowning her.

Though Alexis was not born with powers, she does have an aptitude for magic. She also performed a ritual to the Spider Goddess Lolth, to make herself a drider. Now that she is a drider, she pretty much possesses all the abilities and weaknesses of spiders in the lower half of her body. 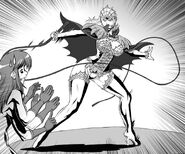